The first trip I made outside of Nottingham was to the “Cathedral City” of Lincoln. It’s about 40 miles east, so takes roughly an hour by car or train to get there from Notts.

I just so happened to be in Lincoln in May of 2017; exactly 800 years after the Battle of Lincoln, so the city had just started their summer of events celebrating the anniversary. If you’re wondering what the Battle of Lincoln is, as I had been, it was a battle which ended with the invading French forces being repelled and King Henry III holding on to his throne. So a pretty important win for the English, which meant a lot of banners and celebrations even 800 years later, when I decided to visit.

Lincoln is also known as the “Cathedral City”, although I think a more accurate name for the city would be the “Hilly City”. The main street that leads to the castle is literally called “Steep Hill”.  And I’ll tell you, it’s steep.

It’s a very touristy street, full of little shops and cafes, which you’ll want to stop in… even if it’s just to take a break from climbing the super steep street. It apparently is a popular street for Deliveroo dudes to climb too, which makes you feel even worse about yourself; having a guy on a bicycle power past your sweaty, out-of-breath-from-just-walking self is not a pleasant experience. 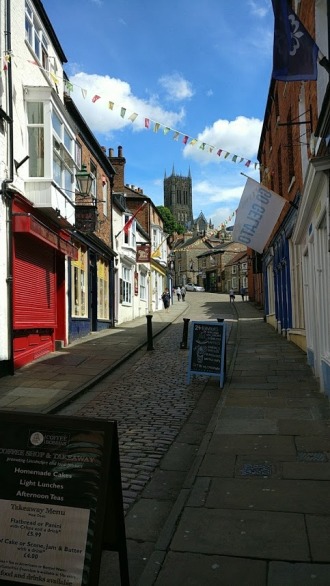 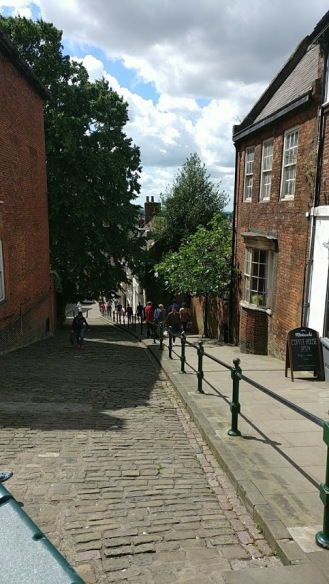 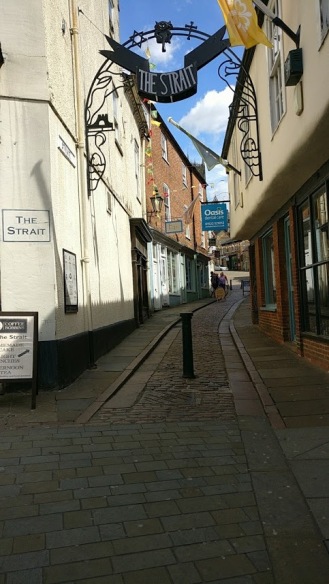 The pictures don’t do it justice, so you’ll have to take my word for it – it’s steep. But anyway, the climb is well worth it. When you reach the top, you have Lincoln Cathedral on your right, and Lincoln Castle on your left. I opted to check out the castle first, which was a much more exciting experience than the Nottingham Castle, I must say. 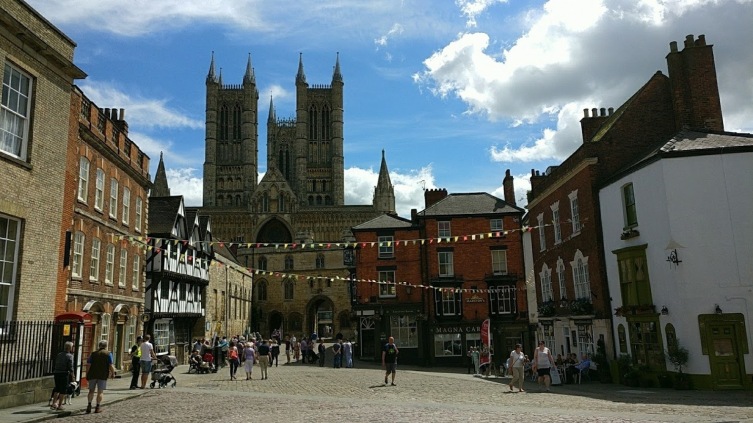 Bit of a back story on the castle – it was built in 1068 by William the Conquerer, so it’s getting close to a thousand years old. The site is actually a pre-existing Roman fortress, and is one of only two castles in this country with two mottes. So it’s a pretty unique castle.

As soon as I entered the castle, I saw signs saying that the Magna Carta was on display…  because of the 800th Anniversary of the Battle of Lincoln, they had a special display of some of the most important documents in English history. Anyone that knows me knows I love history, so my inner history nerd went nuts seeing this. I bought an inclusive ticket which included admission to the Medieval Wall Walk, Victorian Prison, and the Magna Carta Vault.

I started the castle tour off with seeing this vault. And of course I wasn’t allowed to take pictures, so I immediately texted people at home saying “OMG I just saw the Magna Carta!!” and it made me feel like even more of a nerd to have them all respond with I don’t have a clue what that is, but cool?!

So, for my unknowing friends, the Magna Carta is an over 800 year old parchment; the first charter to limit the power of the monarchy, and guarantee the rights of individuals, such as rights to justice and a fair trial. The basis of democracy really.

Since I wasn’t allowed to take pictures… here’s a facsimile copy of the Magna Carta held at the Lincoln Cathedral. The display of the original copy in the vault at the castle is much fancier.

So, yeah. I got to see one of only four original surviving copies of the Magna Carta, from the year 1215. Alongside one of the two 1217 Charter of the Forest copies. The Charter of the Forest basically complements the Magna Carta clauses, giving individuals rights/access to forest lands previously deemed “royal forests” – for use by the royals only.

The third historical document I caught a glimpse of was the Domesday Book – over 900 years old. This book is essentially the earliest surviving public record; William the Conquerer commissioned it in the year 1086 to give a picture of the realm – it recorded the value and resources of every manor in the land.

That’s your history lesson for the day, class dismissed.

Back to my point – Lincoln Castle was way more exciting than Nottingham Castle.

The next stop on my tour of the castle was the Victorian Prison. Now, I’m not sure about you, but when I picture a prison, I picture grungy, old, ugly buildings with no light. Not this one.

Lincoln Castle’s prison is not like any other prison I’ve seen. (Which, to be fair, I think is only three… but that’s beside the point).

The first part of the prison I saw was actually the prison chapel. Which is also unlike any other chapel I’ve seen.

This chapel is a separate chapel, designed to keep prisoners apart even during worship, and is the only surviving example in the world. The male prisoners would be locked in these little wooden stalls, able to see the chaplain but not each other. Every prisoner, excluding Roman Catholics, the sick, and women with babies, would attend daily prayers here and two services on Sundays.

I say it’s not like a normal prison because look at all this light… And beautiful huge windows and arched ceiling. The place has bloody skylights! 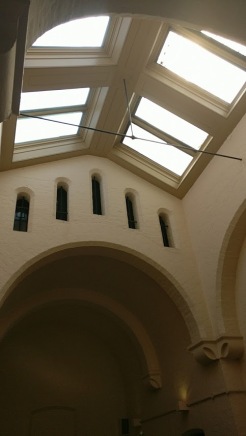 The red-brick prison wasn’t actually built until 1788, and the Victorian prison wing built later in 1848; prior to this the castle had your classic dungeons – crumbling, filthy dungeons without any fresh water or sanitation. Hell of an upgrade.

It wasn’t all glitz and glamour though. They did explain that the place was actually very overcrowded and hence, disgusting. They had 3-4 beds per cell, and a lot of disease broke out.  The Victorian prison ended up being open for only thirty years, closing in 1878. 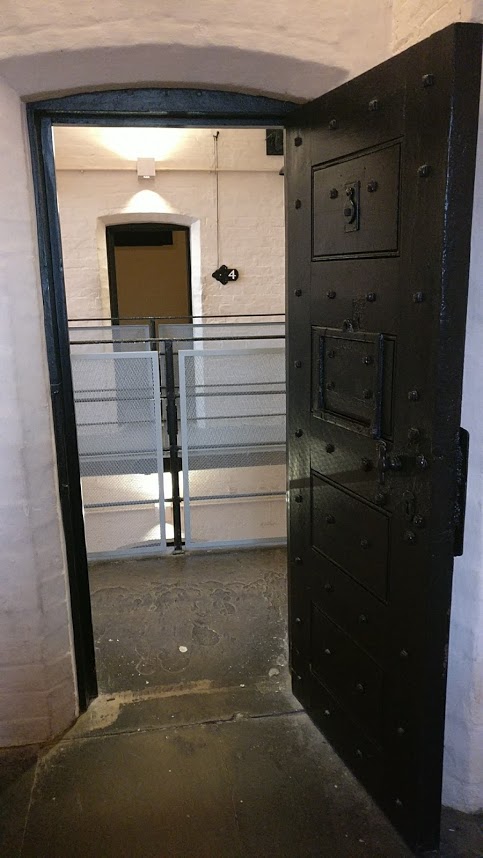 Still had a pretty decent exercise yard, though. 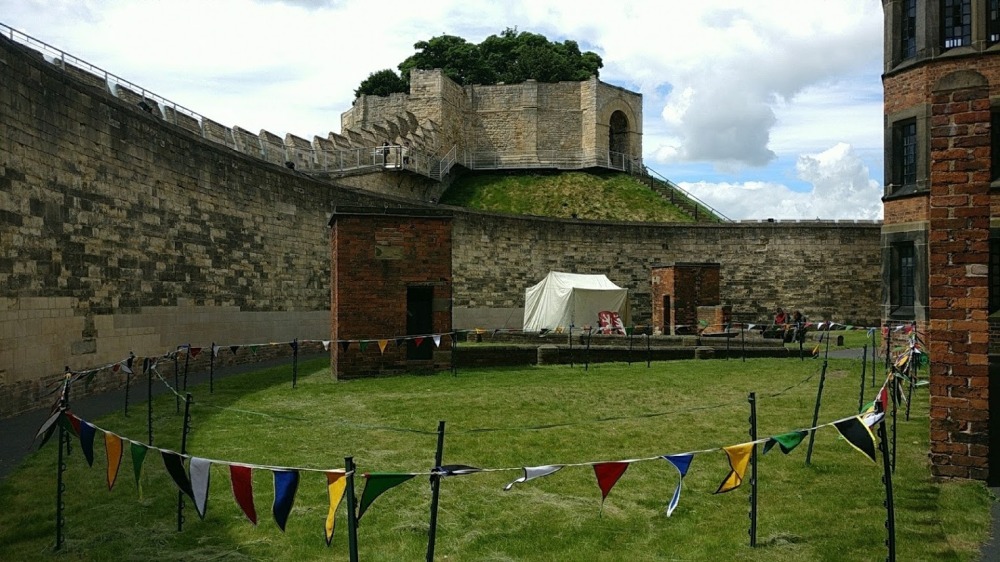 Because the castle is set on top of a hill (as most castles are I suppose), the views are really spectacular. You can actually walk around the top of the castle walls (the Medieval Wall Walk part of my ticket), which go all the way around the castle, so you get 360 degree views of Lincolnshire. 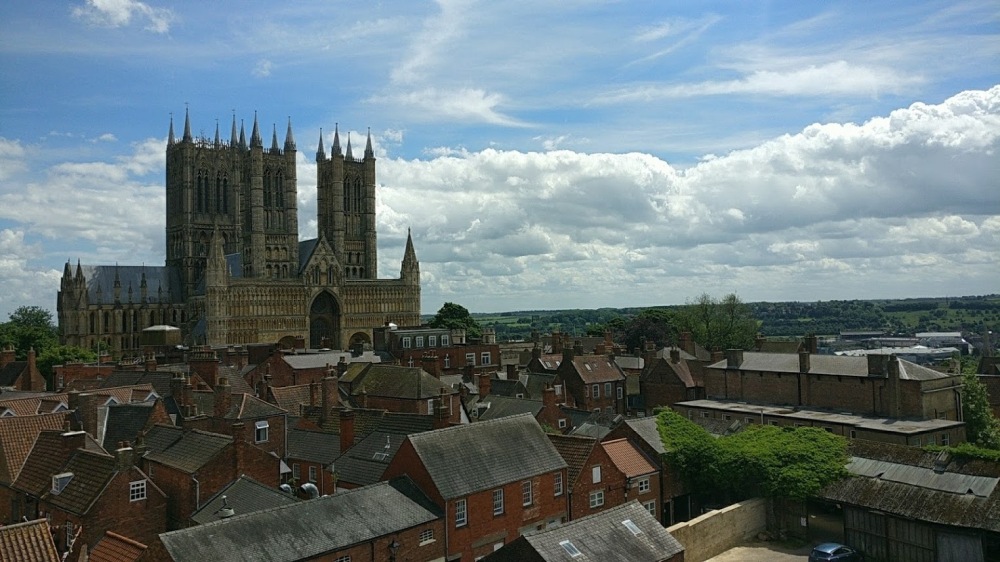 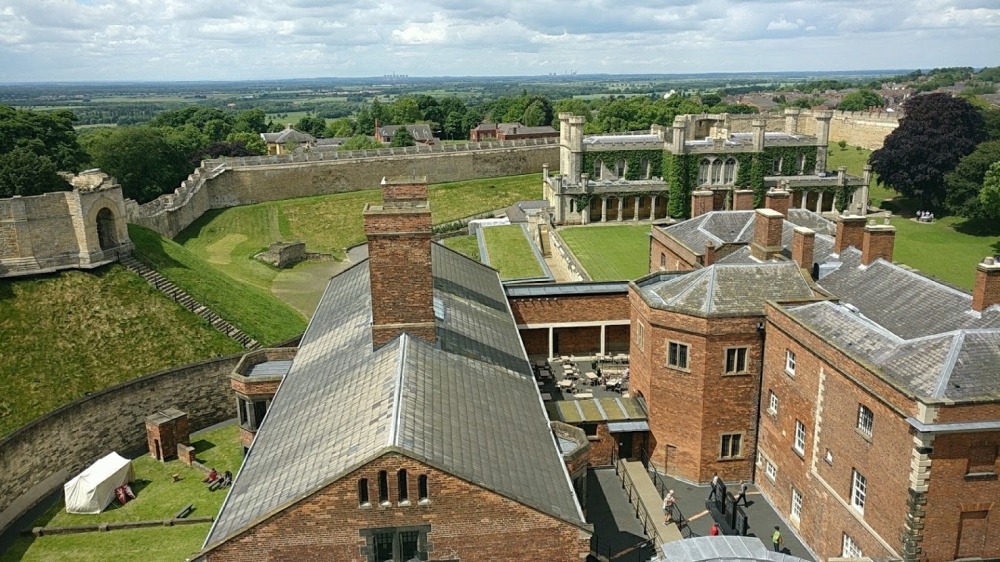 If you ever are in Lincoln, I highly recommend checking this place out. The prison audio guide was really interesting, the wall walk had incredible views, and it’s a bit humbling to see pieces of history over 800 years old!

I strolled over to the Lincoln Cathedral after spending most of the morning at the castle. The cathedral was consecrated in the year 1092, and once the central spire was raised in 1311, it became the tallest building in the world. This title lasted for 238 years, until the spire collapsed in 1549 and was never rebuilt. 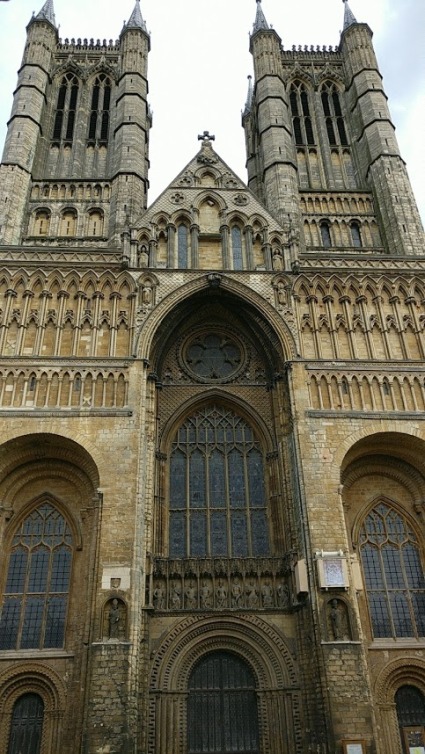 The place is massive, with absolutely gorgeous architecture. The stone carvings and stained glass windows are stunning, and the stories portrayed in the windows interesting too. For a building this size, I was really impressed by the amount of detail it has. 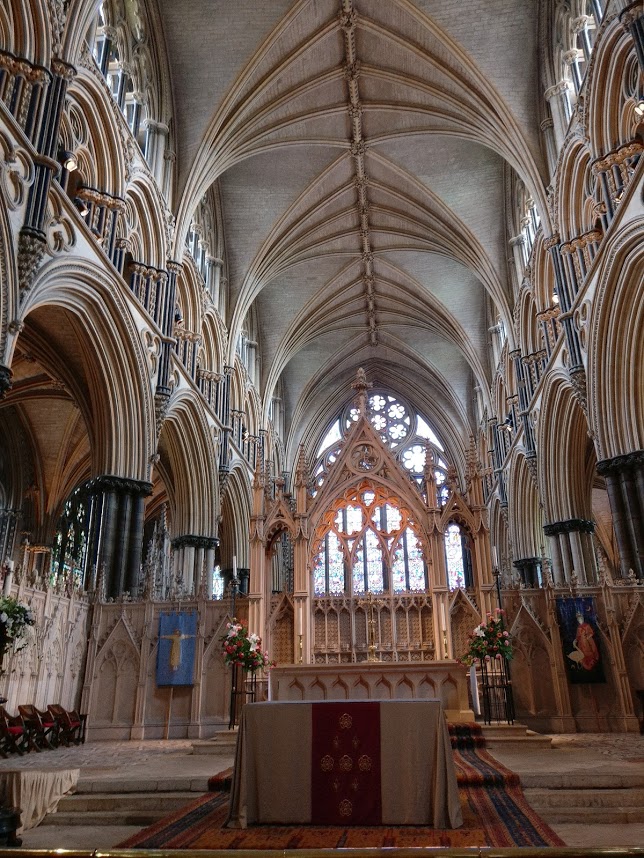 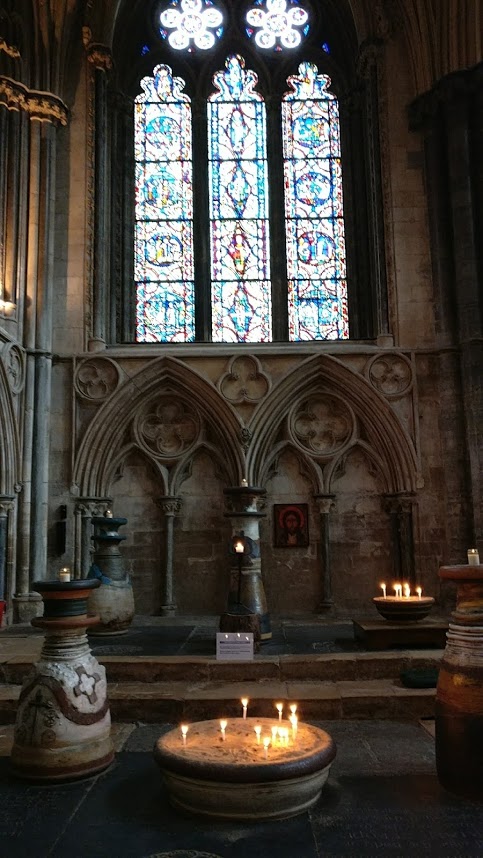 The choir was practicing while I was wandering around, making the experience even better. The sound in the building is really spectacular.

I just missed the tour that takes you up to the roof, so I wasn’t able to experience that, but I’ve heard it’s well worth it if you ever get the chance to go.

I didn’t get to check out any of the other touristy spots in Lincoln, since it was a Sunday and I’d spent so much time at the castle and the cathedral that everything else was closed/closing when I was done. So I spent the rest of my time in the city wandering around, walking along the waterfront, and ended my trip to Lincoln with a delicious Sunday roast. 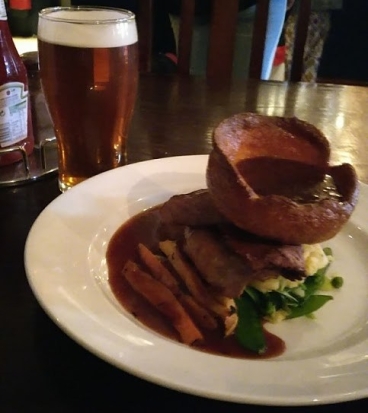 If you love history like I do, you’ll certainly love Lincoln. And hey, even if you don’t, the place is pretty enough it’d be awfully hard not to enjoy a trip to this medieval city!