Ah, Austria. The land of mountains, music, and Mozart.
I was so excited to see the place featured in The Sound of Music, and my many years spent practicing Mozart on the piano had me secretly geeking out at the idea of being in his hometown.

And Austria certainly didn’t disappoint… If anything, I was just disappointed we didn’t have more time there. It’s yet another beautiful country in Europe; are there any countries in Europe that aren’t gorgeous?

We drove through the Alps – literally, drove through them; there are tunnels through the mountains several kilometres long – from Slovenia to Salzburg. Vastly different from the previous two countries (Croatia and Slovenia) we’d been in, yet only a few hours’ drive away. That’s Europe for you.

We went from sun and warmth to rain and cold – it dropped from an average of 20 degrees in Hvar to about 10 degrees in Salzburg, and the dampness made it feel even cooler. The rain didn’t let up at all the entire time we were there, but despite the damper on things, I absolutely loved Salzburg.

We had booked in for two nights in Salzburg, thinking that would be plenty of time. Boy, were we wrong. We ended up stuck in traffic on the highway, then had to make a huge detour through twisty, turn-y back roads up through the mountains, which made our long drive even longer… Although the detour did give us a much more scenic route, we didn’t get to our Airbnb until quite late into the evening.

That left us with basically one day to see all of Salzburg. Which obviously wasn’t enough, and I need to go back to properly check out the rest of the city. As if I need an excuse to return to this place. But, despite just having one full day in Salzburg, I fell in love with the charming town and managed to feel comfortable and a bit enchanted at the same time. 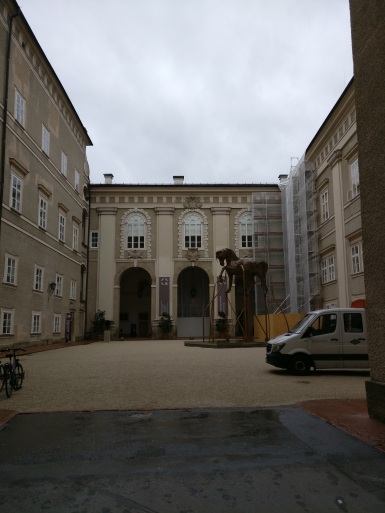 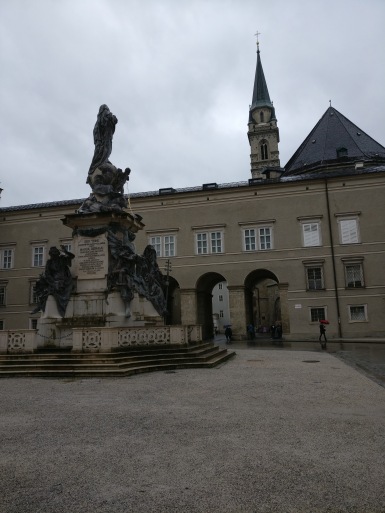 One of the best things to do in Salzburg is just wander the streets with the many shops, or take a stroll by the Salzach River. We walked at more of a brisk pace than a stroll due to the rain, but still, you can’t help but enjoy the architecture, along with the view of the nearby mountains, and Salzach River. 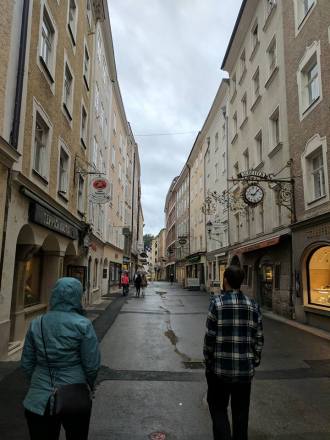 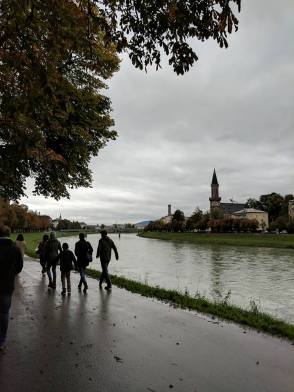 So, as I mentioned before, Salzburg is the birthplace of Mozart and his home (Mozart Wohnhaus) on Makartplatz, where he resided from 1773-1781, is now open to the public as a museum. Mozart’s Birthplace is the smaller of the two Mozart museums in Salzburg, but it features his first violin, which he played as a six-year-old. You can also visit the Residenz Palace with elegant state rooms, where Mozart performed concerts when he was young.

If you’re more into movies than music, Mirabell Palace is home to the formal Mirabell Gardens, featured in the film The Sound of Music. And it’s just a five minute walk from Mozart’s Residence, or ten minutes from Mozart’s Birthplace. We didn’t think it would be quite as amazing in the pouring rain, so opted out of it. But if you go in Spring or Summer, you’ll see them in all their glory.

We took the funicular up the hill to the Festung Hohensalzburg, the largest intact fortress in Central Europe, which overlooks the city. It’s 900 years old, open year-round and has awesome panoramic views of the city, mountains, and Salzach River. Admission was €12 including the funicular ride, and well worth it. 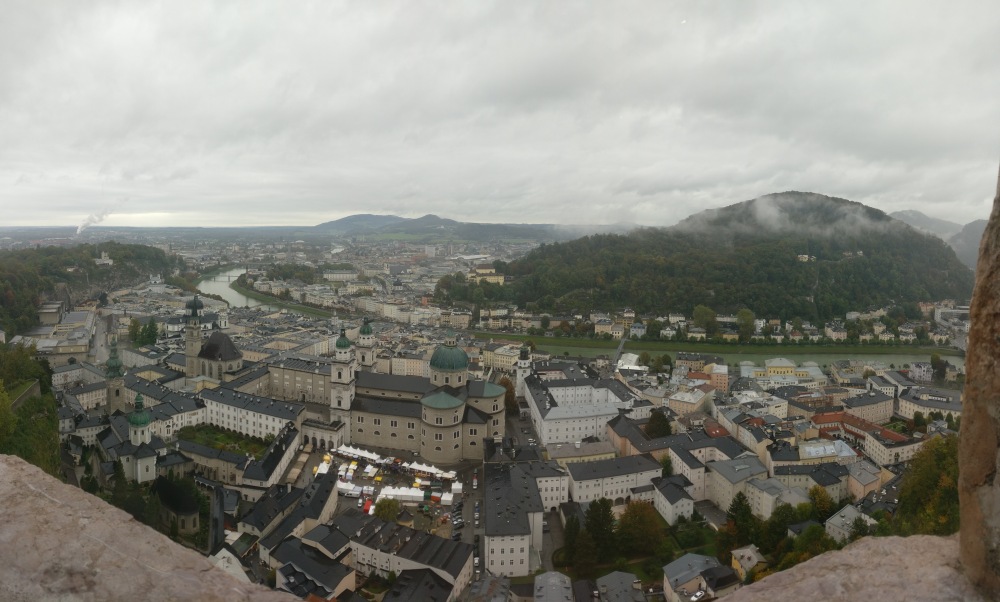 The massive fortress has many areas to view – the arsenal showcases medieval instruments, armour, and frightening torture devices, while the royal apartments show the wealth of the Archbishop, and even the granary is impressive – it housed enough grain, cured meat, and wine to provide for an entire year in case of siege. 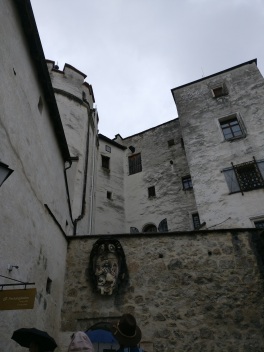 We spent the better part of the morning and early afternoon wandering around the fortress, then headed to Augustiner Braustubl, a monastery-run brewery since 1621. There’s a 1000-seat beer garden, serving litre steins like an Austrian version of Oktoberfest. This brewery is an experience all its own – you pick your mug off of a shelf, wash it out, pick your beer, and they fill it from wooden barrels. 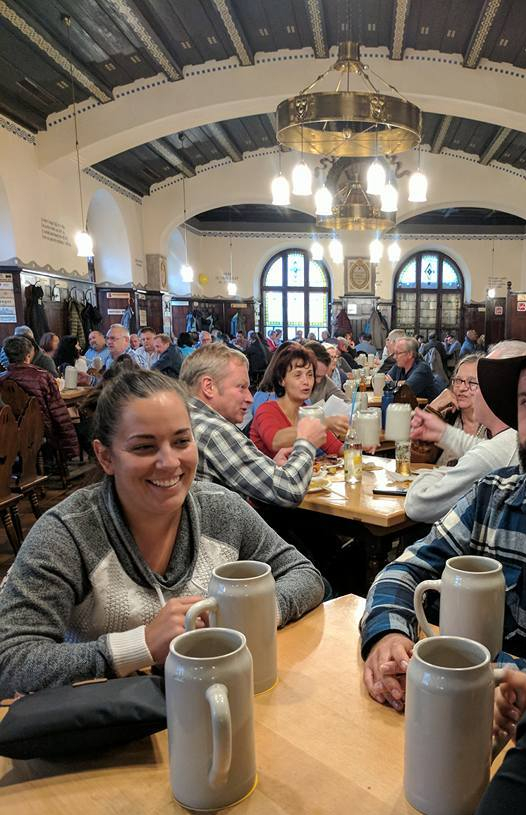 There’s food stalls there too, selling things like a heaping pile of ham on a plate (Austrians love their meat), or pretzels, or any of your typical Austrian food – all delicious. It’s nearly impossible not to get some snacks (if not a whole meal) here; the scent wafts through the whole place, and what does one want more than salty, greasy grub when drinking beer?

We didn’t have much time in Salzburg, but I’d love to go back to Mozart’s hometown. Preferably sometime when rain isn’t pouring, but hey, it’s still beautiful when damp.

We headed to Vienna the next day, on our way to our final destination – Budapest. Sadly, we were super tired and had to be in Budapest by 5pm, so we just did a quick loop through the city centre, grabbed some food from a food truck, and made our way to Hungary. But the architecture is amazing – I could spend the whole day just checking out the buildings. 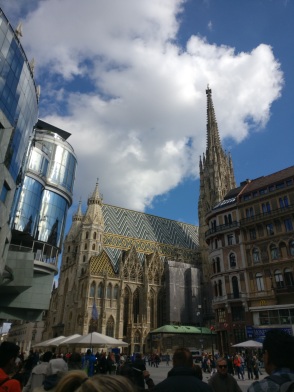 There’s so much to see in Austria, I’ll certainly be back!