Five years ago, I had never heard of Lithuania. Not until a colleague at work told me her family was Lithuanian, and my response (I’m ashamed to admit now) was, ‘They’re what now?’

Fast forward to 2019 and here I am just getting back from an absolutely fantastic time in the Baltic country of Lithuania, visiting my boyfriend’s family in his hometown of Kretinga.

And oddly enough, Lithuania reminded me of home. Yes, this random country I had never heard of until a few years ago somehow made me think of home nearly every day I was there.

Sounds crazy, I know. But looking at this picture, does it not look like it could pass for one of the many, many lakes in Nova Scotia?

Now, I’m not saying that all of Lithuania reminds me of home. Vilnius is nothing like Halifax. But these rural areas, where we went swimming in lakes, or kayaking, or paddle boating, or just driving down dirt roads, definitely felt like summers in Nova Scotia.

We stayed our first night in the capital, Vilnius. Since we had just one day, we roamed around and saw the main sights – Gediminas Tower, Vilnius Cathedral, St. Anne’s Church, Palace of the Grand Dukes of Lithuania, Cathedral Square, walked along the Neris River, and through Bernardine Park. But, lacking time, we didn’t get to actually go into many places, like the Genocide Museum, or the many, many churches. We loved everything we did see and do though.

Just strolling through the streets of the Old Town is lovely, with little cafes and restaurants lining the sides of the cobblestone streets. But I think sometimes the best way to appreciate the views of a city is from above. So off to Gediminas Tower we went.

On the way, we wandered through the Cathedral Square. There’s a tile here which is said to bring luck to those who stand on it, spin around three times clockwise, jump up and clap once, and make the biggest wish that comes from your heart (while providing entertainment for any bystanders watching).

This is the Stebuklas Miracle Tile (Stebuklas meaning ‘miracle’ in Lithuanian), which is not only famous for its magical, wish-granting abilities, but also for marking one end of the longest unbroken human chain in history, the Baltic Way. On August 23, 1989, approximately two million people joined hands across Lithuania, Latvia, and Estonia, spanning over 370 miles, as a powerful statement against the Soviet government. 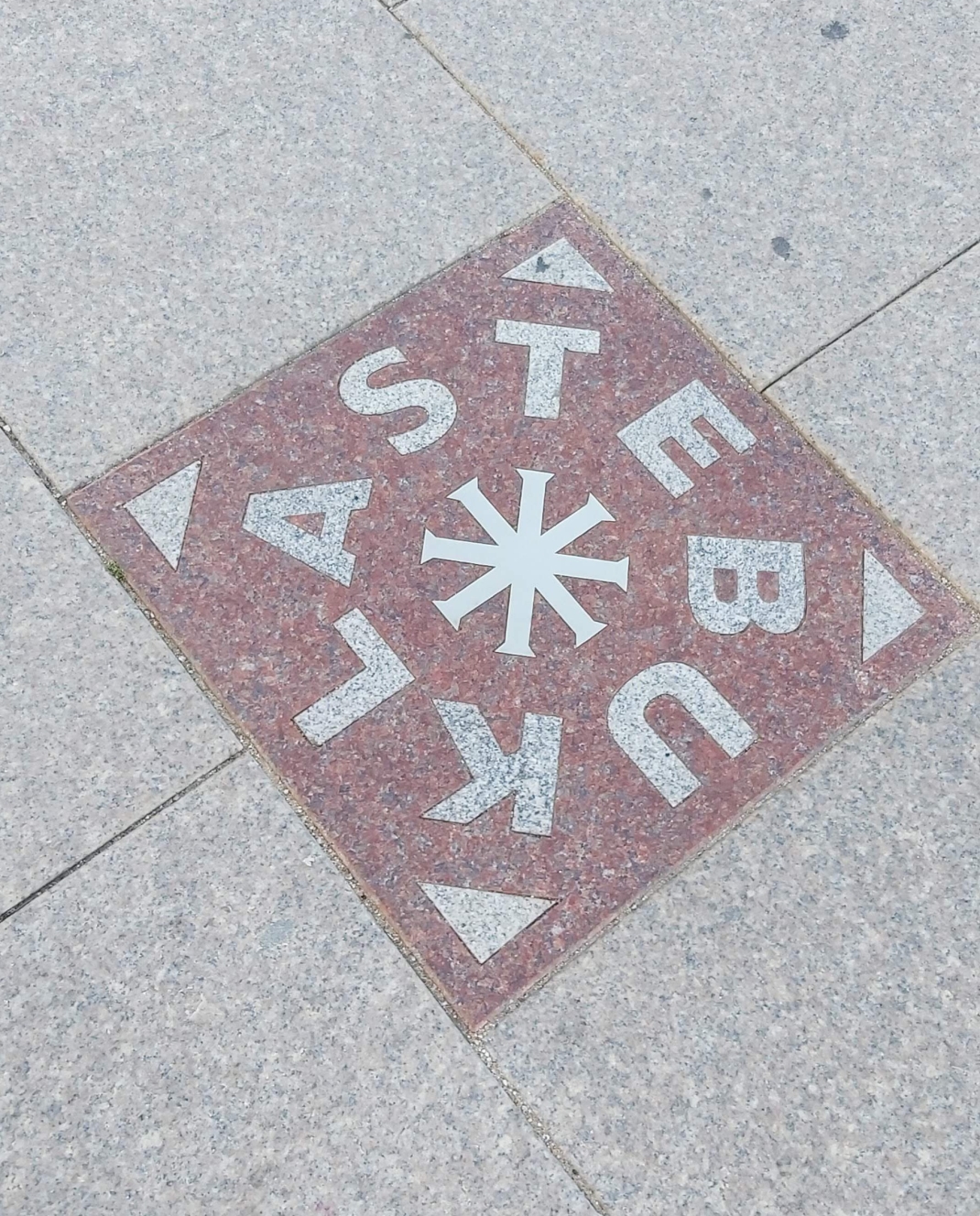 Also found in Cathedral Square is the monument statue of the Iron Wolf, symbolizing the founding of Vilnius. According to legend, Grand Duke Gediminas (ruler of Lithuania), was on a hunting trip when he grew tired and fell asleep. A dream then came to him of a huge iron wolf howling at the moon on the nearby mountain, which was interpreted by a prophet as “The Iron Wolf symbolizes an insurmountable castle and city that need to be built in this place.”

The city was then built, became the capital, acquired the name of Vilnius, and as predicted, withstood ancient battles, world wars, and Russian occupations. The Iron Wolf statue now stands at the very site where Gediminas conceived his dream.

Just next to the statue of the Iron Wolf sits The Palace of the Grand Dukes of Lithuania. This was part of the original castle in Vilnius, dating back to the 13th century, before it was entirely demolished in the early 19th century. Rebuilt in 2009 during Lithuania’s one-thousandth anniversary, it’s now known as the National Museum – a multifunctional museum as well as host to a variety of public events, conferences, concerts and performances.

Gediminas Tower, situated on top of a hill, is the only remaining part of Gediminas Castle; the fortress Gediminas built following his Iron Wolf dream. They’ve gone and ruined it a bit by removing trees from the banks of the hill, which caused the hill to start to collapse slightly, forcing them to fill it in with rock…

So it’s not quite as pretty as it usually is, but regardless, the views from the top of the tower are great.

Although it’s free to walk up to the tower, you can’t actually walk around much once you reach the top of the hill as it’s currently all gated off for restoration. You can pay a small fee of 5 euros to go into the tower and climb up to the top for 360 degree views of the city, however, which are well worth it. It’s quite something to see how one side of the city, the Old Town, has everything so nicely preserved or reconstructed, whilst the other side is all modern buildings.

The Three Crosses, built at the dawn of the collapse of the Soviet Union, is a prominent monument positioned at the top of Bald Hill, overlooking the Old Town, not far from Gediminas Tower. Originally built in the 17th century, Stalin had them removed, but they were rebuilt in 1989 as a symbol of both Lithuanian mourning and hope. This is also a perfect viewpoint for watching the sun set over the city.

After descending the tower, we walked through the serene Bernardine Park, where there was some live music playing nearby, then swung around to see St. Anne’s Church.

St. Anne’s Roman Catholic church is a famous symbol in Vilnius. A Gothic style church which has survived over 500 years to present day without changing, the Church of St Anne stands out from the rest of the churches in the capital. Legend has it that Napolean was so fascinated by it that claimed he wanted to take it back to Paris with him in the palm of his hand.

We stopped for supper at Etno Dvaras, where we tried some traditional Lithuanian cuisine such as cepelinai (potato dumplings) and fried bread with cheese. It was all incredible, and required another bout of walking to prevent us from becoming vegetables for the night.

So we strolled down to the River Neris, a perfect area for a peaceful stroll while watching the sunset.

We headed back to our apartment for the night via Gediminas Avenue, and had planned to grab a couple of beer from the Lidl on the way. We spent ages trying to decide which ones to try, only to be shut down at the till as you can only buy alcohol from 10am to 8pm in Lithuania, due to new laws in 2017 restricting alcohol consumption. While not legal to purchase alcohol in retail shops after 8pm, you are still able to go to restaurants/bars after this time and get your booze on there if you wish.

At the end of Gediminas Avenue, where it meets Cathedral Square, is the Cathedral of St. Stanislav and St. Vladislav, aka Vilnius Cathedral, as well as the Bell Tower. The tower has been there since the 13th century, originally part of the defensive wall of Vilnius. In the 16th century, it was converted to a belfry for the Vilnius Cathedral, which you can now climb to the top floor (50m high) to enjoy the view of the city.

After our day of walking the city, went to a little hole-in-the-wall kinda bar, just next to our apartment, with craft beer and cocktails. The beers we tried were all fantastic, and we even ordered some fried bread with chili that was just as delicious as the fried bread we had earlier that day.

The next day, we were up early to head out of the city to Kretinga, a little town close to the seaside area of Palanga, where my boyfriend grew up. We stayed with his parents for the rest of our week in Lithuania, and I have never experienced such great hospitality before.

They grow their own fruits and vegetables, with the most flavourful tomatoes and cucumbers, plus peaches, apples, apricots… There’s nothing quite like home grown food.

Kretinga is quite a small town, but it’s close to some bigger towns like Klaipeda and Palanga. Sadly, much of Klaipeda was destroyed in WWII, but it is the third largest city in Lithuania, after Vilnius and Kaunas, and also Lithuania’s busiest port city. We took a quick stroll through Klaipeda one morning, walking along the water, running into this creepy creature…

According to legend, a black ghost emerged amidst the fog from the Dane River one night in 1595. He warned one of Klaipeda Castle’s watchmen that the city’s supplies of grain and timber were too low to provide for the citizens, then disappeared. This statue commemorates the black ghost that saved Klaipeda.

We then continued our route along the water, which is nice and peaceful, with plenty of boats bobbing along.

While Vilnius is known for its street art, including being home to that controversial image of Trump and Putin locking lips, Klaipeda also has some pretty impressive art painted on buildings.

Some of the buildings here are also quite similar to ones in Vilnius, but this town is significantly quieter than the capital. While there are people bustling about in the capital, there were hardly any people out and about in Klaipeda. It was quite refreshing, after spending the majority of my time in busy cities since moving to Europe, to be in a town you can walk around without dodging other people left, right, and centre.

For much of its history, Lithuania was a pagan nation. They were the last nation in Europe to convert to Christianity, and the country is still steeped in superstitions and folklore.  Which explains why you can find plenty of random sculptures and carvings all throughout the country, such as these wooden sculptures found here in this lovely park.

We didn’t spend much time in Palanga; we were there just long enough to take a stroll down to the Bridge of Palanga, an L-shaped pier into the Baltic Sea. But this was probably the busiest place we visited in Lithuania – a hot, sunny Saturday drew people from all over to Palanga Beach.

Our stay at my boyfriend’s home was so quiet, and relaxing, it constantly made me think of being at my own parents’ home in the country. I suppose this was a different kind of place than the usual bustling cities I travel to, but hanging out here with such great people, great food and great drinks was just the kind of break I needed. And with this kind of garden view, it was almost like being on a relaxing resort retreat.

We spent most of our time in Lithuania doing many things I miss about home – kayaking, paddleboating, swimming in the lake, going to the beach, hanging out in the quiet, countryside… And just being with family; even if it wasn’t actually my own.